THE KILUNG SHEDRA WAS DESTROYED BY DEVASTATING FIRE ON APRIL 7th, 2016 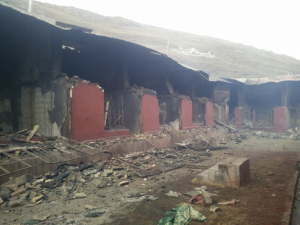 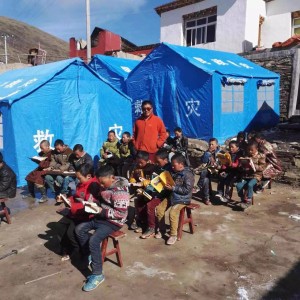 Immediately, the local and international community sent relief and helped house the children in tents and temporary classrooms so that their studies could resume. As winter approached and the tents started to leak, the children were moved into monk’s cabins, with the monks doubling and tripling up in the rest of the cabins.

However, because of the hardships of continuing the schooling in temporary structures, and construction delays, there was no school or shedra in 2017. While waiting for the rebuilding of the Shedra, the children and monks have scattered in different places, some at home, some in public school, and some at other Shedras such as Dzogchen, Shechen, Jangma, Palpung and Machen.

The arduous task of demolishing the burned down shedra was completed in late summer 2016, resulting in a cleared site ready for the rebuilding of the new shedra. Construction began in spring 2018. Click HERE to follow the rebuilding. Now, at the beginning of 2022, the shedra structure is almost completely rebuilt!

The new Kilung Shedra, Children’s School and Community Center will allow the children and monks to return to the Kilung Valley to continue their studies and education close to home. The structure will also provide expanded space for a girl’s school, medical and health care, and community development activities.